Five reasons why you should attend next year's EuRuKo

Although it is not the first time that we attend a big conference - we've attended Startup Grind Global Conference, BaRuCo or FullStackFest - it was the first time we took this sort of adventure where a big part of the team travelled together.

The outcome of it couldn't be more positive. We've detailed it in five points that you can find below. 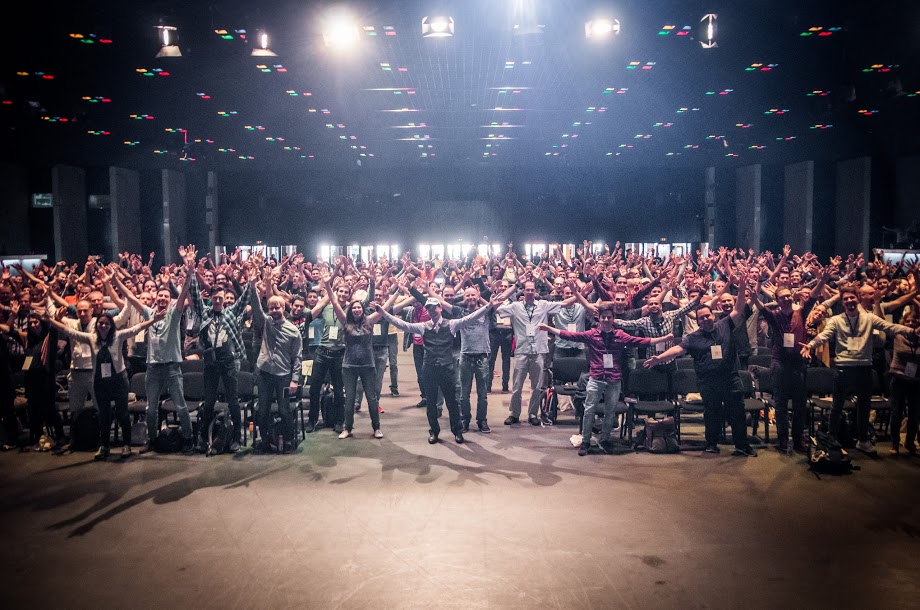 This is how EuRuKo 2016 looked like from the inside. Photo by Genadi Samokovarov.

To give a bit of background, we travelled to Sofia and got a nice AirBnB right in the centre of town that would allow us to work from home with a kickass wifi connection for an entire week.

One of the good things of having a company whose core principle is remote working is that we can travel around and work from anywhere to attend interesting events, or just for the sake of travelling.

The days prior to the event, we spent them discovering the city and going on a one-day trip to visit the Rila monastery in the middle of the country and doing some city tours. 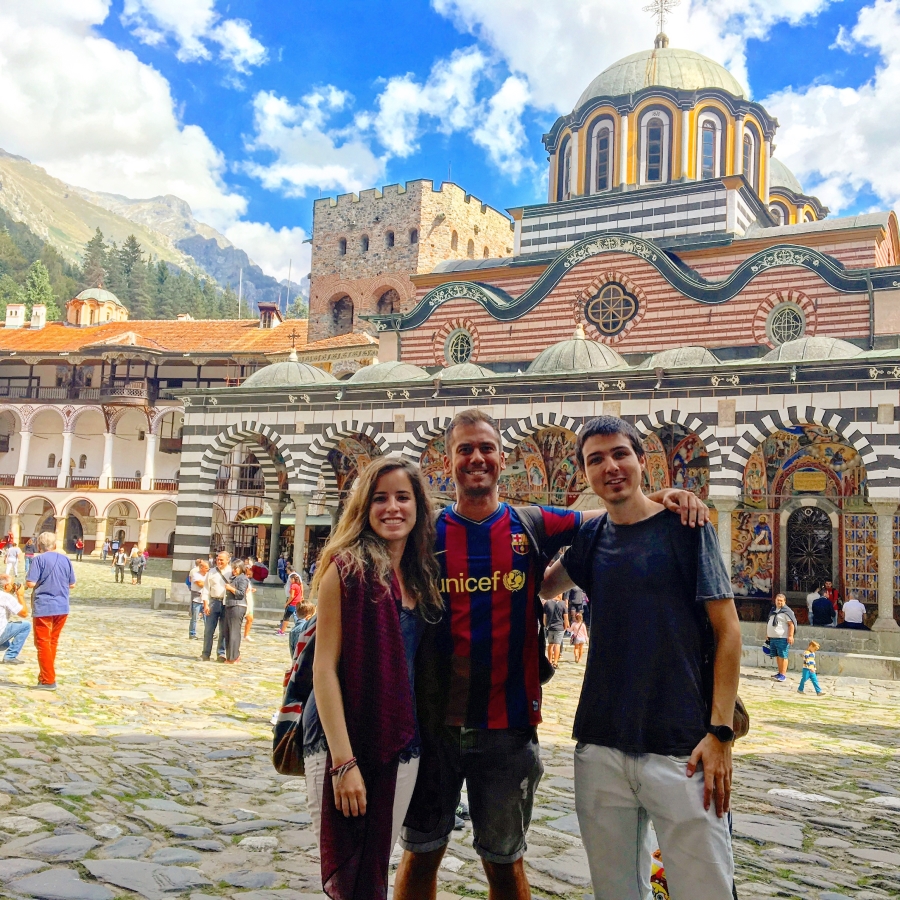 The Martians conquering the Rila Monastery in Bulgaria.

The conference lasts for two days, Friday and Saturday, with a pre-conference party on the night of Thursday, where we checked in so we didn't have to queue on Friday morning and grabbed some beers with the community.

The venue was actually amazing. It's the National Palace of Culture of Sofia, right in the heart of the city, close to metro stations and well accommodated to cater every need of the attendees: comfortable seats, a large conference room, space for networking & sponsors' booths, a terrace with incredible views and most important in events like this: good acoustics. However, if we have to point out a bad thing about the venues is that the wifi never worked throughout the conference (luckily enough, we had bought SIM cards with data plan).

All in all, we really liked what we saw, and we've compiled a list of reasons why you should join us in the next EuRuKo 2017. Maybe these photos help you decide: Photo Gallery of EuRuKo 2016.

Let's get more into detail!

Reason #1: It's all about the community

This is the most important principle about the Ruby world: it's all about the community.

Ruby developers - and companies - are really committed to helping one another and making the community grow healthily. While we have attended many Ruby and Rails meetups in the past, we never felt it as much as we did in the EuRuKo.

For instance, during the conference, the attendees are eligible to go on stage and propose where the next edition of the EuRuKo is going to be held, and only the attendees can vote to elect it.

If you're so committed to the community that you travelled to attend EuRuKo, you've earned a say in the next edition's location. 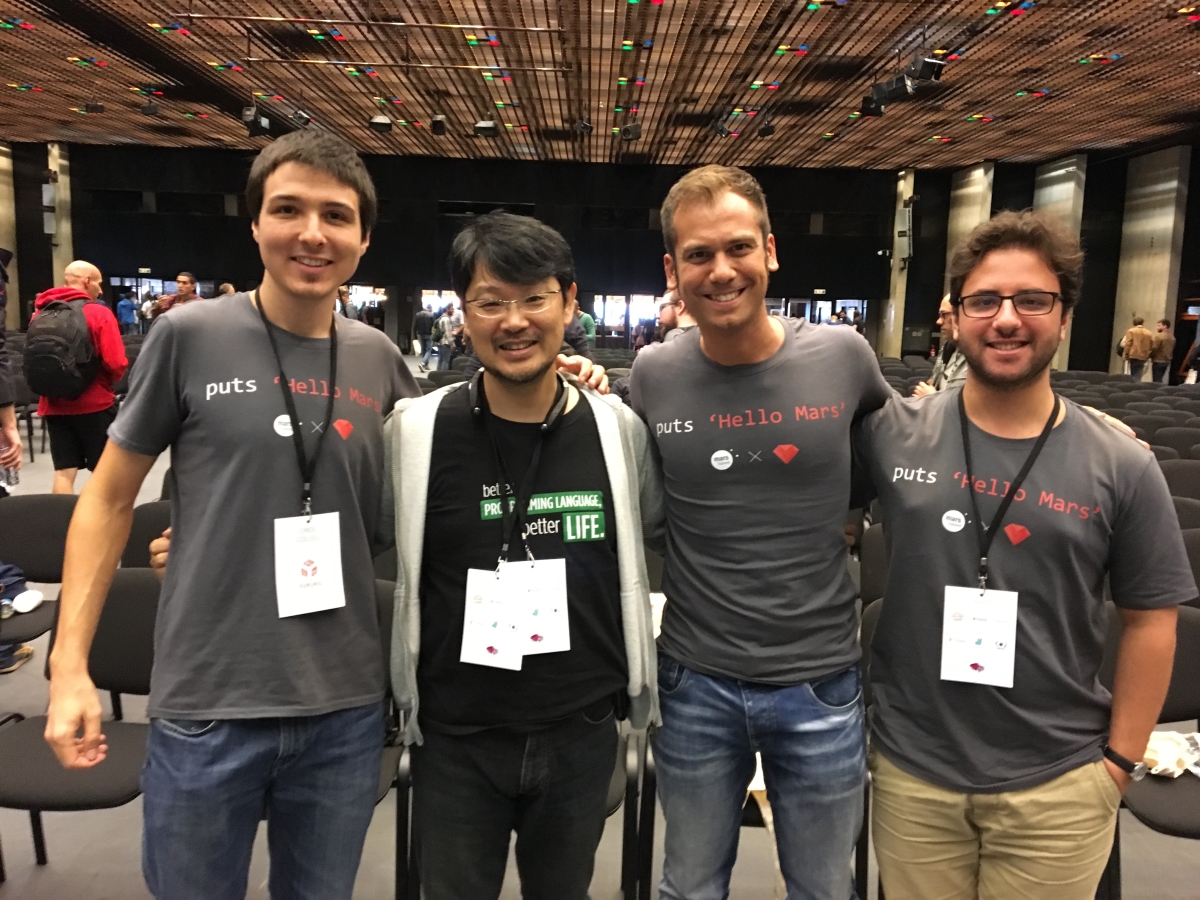 A very good example of how committed people are is the following: our friend and Ruby Hero Xavier Noria told us that the gong that is given to the organisers of every edition - yes, they use a GONG for the lightning talks - was first bought during the EuRuKo 2009 that was held in Barcelona. Xavier took this idea from the Perl community, where he is also a very active member.

This gong, nowadays, represents a token of leadership that is passed on the next organisers of the conference, once the current edition is over.

Reason #2: It is very accessible

We met all sorts of people at the conference. Ruby developers, Elixirists, marketers, bloggers, frontenders who wanted to learn more about the backend side, backend fundamentalists, growth hackers and curious people.

The conference is very accessible for everyone: not only is it cheap (it only cost 60 euros, this edition), but the content is well-balanced and not Ruby hardcore, so everyone can have their share of interesting talks.

As it is the case with most conferences nowadays, the EuRuKo follows the Berlin code of conduct to ensure everyone behaves properly during the conference and that the proper values are enforced.

On a personal level, even if I haven't been developing for years, I didn't feel unwelcome or completely lost at any time.

Although you can't really please everyone, we thought the content was fairly balanced between highly technical talks and more high-level stuff. There was also space for other technologies (GraphQL, Kafka, just to name two of them) and even other languages, like Elixir, although most of the conference talks revolved around Ruby or Rails, obviously.

On the speakers side, we had a good mixture of them: Xavier Noria talked about simplifying Ruby code, Matz (creator of the Ruby language) talked about Ruby 3, Hiroshi Shibata about how to contribute to Ruby Core, and Rafael França (Shopify) talked about Sprockets. But we also saw less technical talks about internships in Ruby, experiences of running Ruby-based companies or how to create a rescue squad for a large Ruby project like Yammer.

You can actually watch all the EuRuKo 2016 talks on Youtube.

Besides the talks, though, there were a couple of other interesting initiatives: the lightning talks and the coding golf.

The lightning talks are five-minute speeches that work well as an energiser for the crowd. Everyone can sign up for these highly dynamic talks on stage, and they cover a very broad range of topics. We saw technical ones, talking about APIs and security issues in Rails apps, but we also saw more off-topic ones about developing your career, or even about audio signal processing with old computers.

On the other hand, the Golf code was another fun thing to do during the event. Every day of the conference, there were three golf code exercises to solve within a certain deadline.

Golf code consists in solving a problem with the shortest possible code. That is, the fewer characters, the better. One of our developers, Oriol, finished second in one of them. However, it was hard to find time to code the challenges during the conference, and we found ourselves coding during the coffee or lunch breaks. 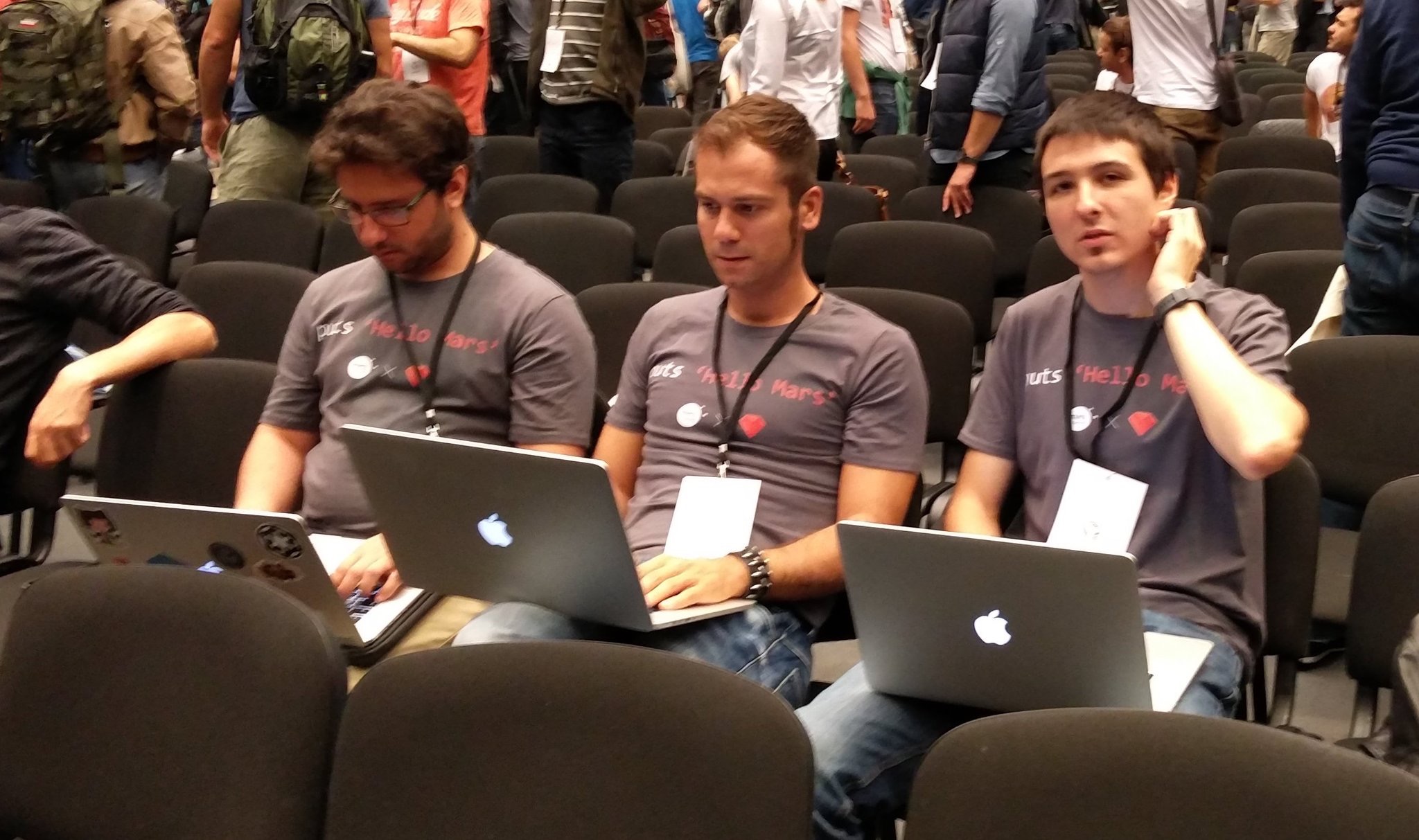 Reason #4: Your company will benefit from it

As an owner of a company, I do personally think this is a good event for your company, for many reasons.

If your company is looking for exposure to developers and the Ruby community, it is a good event to sponsor. Not only you will help to contribute back to this amazing community of developers, but it is also very affordable, compared to other conferences.

Also, there's the inspirational part of the event. Going to good talks motivates a lot. We found that after some of the technical talks, we wanted to go home to test GraphQL or Elixir, for instance. It's, after all, good to keep your team's morale high and will definitely pay off in the short term.

Finally, if you attend conferences on a regular basis, you know that it's good to check in with people regularly in order to build the relationships with them. If you're buddies with the speakers, or with some of the regular attendees, but can't afford to travel a lot to meet them separately, a good way to catch up with the lot of them is by attending conferences they go!

Reason #5: It's a good reason to travel 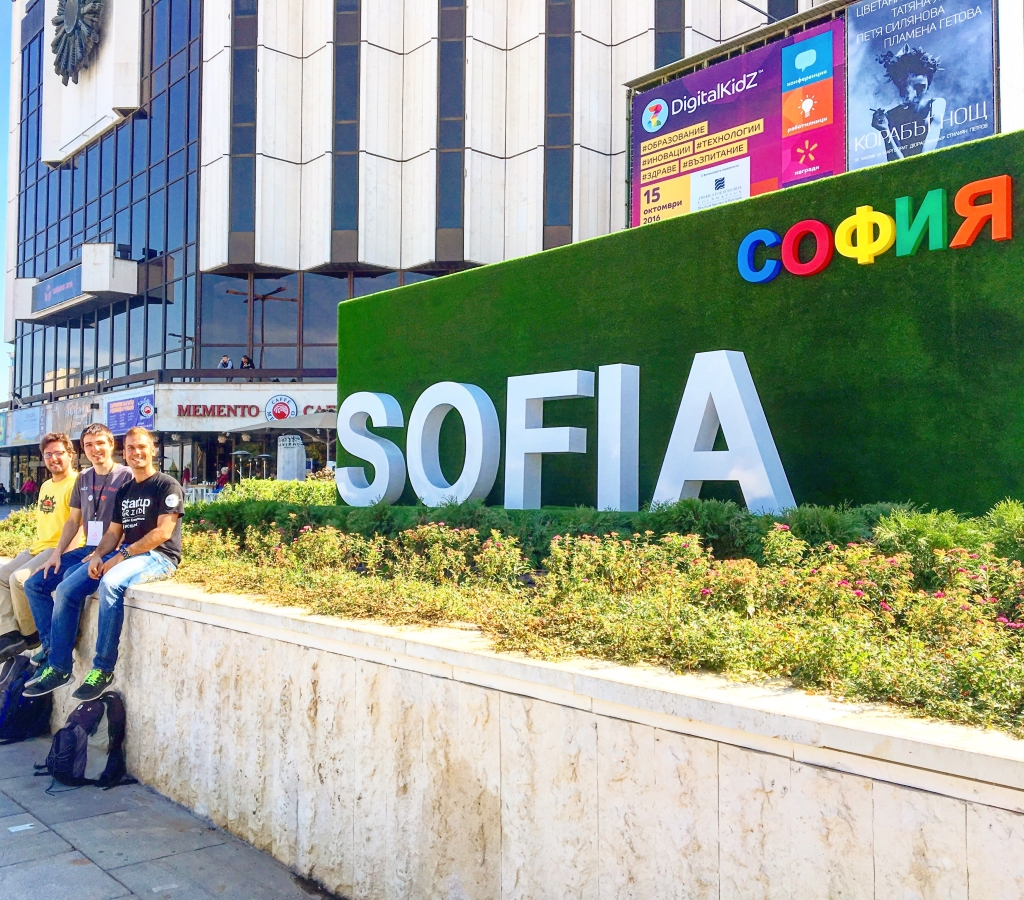 We had time to do some sightseeing in Sofia, too!

The good thing about being a consultancy is that you get to work in all sorts of projects, but we also get too laser-focused on our clients' apps. We barely have time to think outside of the box and do these one-off activities.

The conference was a good reason to spend time together with the team in a different surrounding, which honed our creativity. We even came up with a really cool design for our new t-shirts, that you can see in some of the pictures of this entry!

We also learnt a lot about one another, how to be more productive or how each one of us works remotely, and generally bonded further as a team.

I hope I have given you enough reasons to consider attending next year's edition of EuRuKo. At the very least, you will consider going to a major tech conference that fits your tech stack.

We always enjoy meeting new people, so if you want to reach out to say 'hi', we'll like to drink a coffee to learn more about you, your company, and how we can possibly help you.